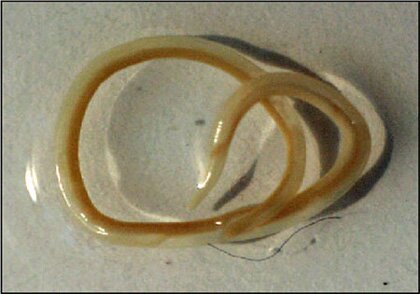 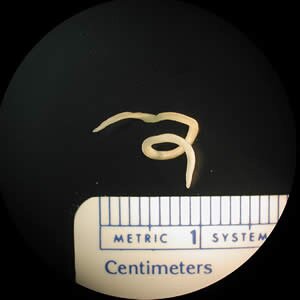 Anisakiasis (anisakis simplex). Anisakiasis is an infestation of Anisakidae nematodes. The nematodes develop in sea shellfish, fish and mammals and are quite common in many regions of the world. Humans are infected accidentally by eating raw infected sea fish like: green herrings or sushi. Two-centimetre-long larvas penetrate the stomach mucosa causing painful stomach cramps and vomiting after several hours since the consumption. About a week after the infection parasites get into the small bowel causing rough stomach reactions sometimes leading to laparoscopy or laparotomy. Anisakiasis usually leads to such complications as: intestinal perforation  and peritoneal anisakiasis. As there are no effective anthelmintics against anisakiasis the treatment consists in removing the parasite by an endoscopic or surgical method. The infection might be detected by a serologic examination. In order to prevent anisakiasis sea fish are frozen (-20C kill these parasites after 60 hours) or it is better to  remove the  entrails of the infected fish directly after catching.