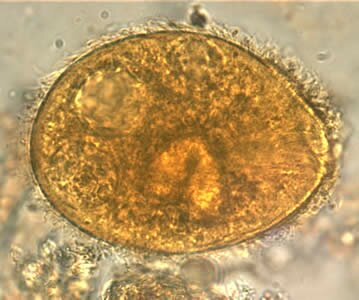 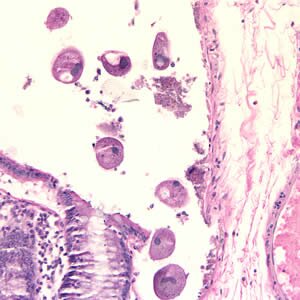 Balantidiasis (Balantidium coli) lives in the form of a trophozoite and a cyst. Both forms have the biggest size of all protozoons able to lead a parasite lifestyle in a human organism. Balantidiasis traphozoites reach 20-200 µm and cysts 45-90µm. Because of their size the detection does not cause any problems for an analyst. It has a pear-like asymmetric shape with a thick equal cover of short piluses. On the front pole of the traphozoite, the cytostome is located by which the protozoon collects food while on the rear pole there is a cavity (cytophyge), which is used for excreting undigested food remnants. In the traphozoite cytoplasm there is a characteristic for balantidiasis nucleus organ containing a kidney-shaped core (macronucleus) and the second core (micronucleus) lying on the concave side of the big core.

On the cytoplasm there are also two pulsing vacuoles and numerous smaller ones. Balantidiosis is an infectious disease developing as a result of balantidium coli protozoons infection.

Balantidiosis development cycle
The protozoon is widespread and a pig is a typical host of the parasite. Men can be infected by the oral tract, swallowing food or water contaminated with pig faeces containing cysts. There have also been infection cases caused by direct contact with an infected person. The swallowed cysts release trophozoites which reproduce in the large bowel causing inflammatory infiltration with necrosis and ulceration. Most people do not have any visible symptoms but some are affected by diarrhoea – the main symptom of this disease. The course of the disease is often connected with bleeding from the alimentary system which can imitate dysentery. In case of balantidiosis, there is no infection of other organs by the blood duct (as it takes place in ambeoic dysyntery).