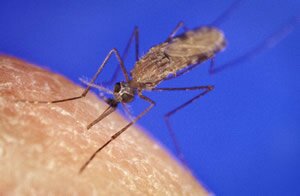 Malaria (plasmodiosis). Malaria coused by coccidia is the most serious parasite infestation on the world scale, taking into consideration its range and mortality. Malaria is caused by four species of Plasmodium: P. vivax, P. ovale, P. malariae i P. falciarum. They have a complicated life cycle consisting in asexual reproduction in human hepatocytes and erythrocytes, and gamogonic and sporogonic reproduction in gnats from the anopheles group. The incubation period lasts usually 8 – 15 days (28 – 37 in case of P.malariae infestation). The majority of P.falciparum infestations show symptoms a month after infection, however some strains, for instance P. vivax might show symptoms even after a year.

Massive fight against malaria, started by the UNO in 1953, led to its elimination in many countries, nevertheless 40% of the world population live in areas where it spreads easily. It is estimated that there are about 273 million cases of malaria infections all over the world, over a million of which end with death. Only in Africa 800 thousand children under 5 die because of this disease. Different environmental factors like: temperature, amplitude, humidity, access to water, people’s immunity, geneticlly fixed characters of erythrocytes determine the occurance of Anopheles and Plasmodium. In order to reduce the number of deaths caused by malaria it is significant to recognise infestation. The most serious complication of P.falciparum infection is brain malaria. It usually starts with anxiety, sanity disorders and convulsions. The infected usually fall into a coma within a couple of hours or days and 20 – 50 % of them die.

Nowadays, millions of genetically modified gnats are released in selected areas in order to fight this dangerous disease. For a long time, scientists have been working on producing a mosquito that will not be a malaria host or one that will not like the taste of human blood. The research will last for a long time yet but it proves how serious the problem is. Over time a malaria protozoon becomes resistant to drugs. Some medicines can be on the market only for a few years then they lose their efficiency compared with other drugs. The production of new ones takes years and costs millions of dollars. Every year, more people die of malaria than of tuberculosis, AIDS or meningitis altogether. These are 300 mln cases 1 mln of which will probably die.

Malaria protozoons attack liver cells, red blood cells and lead to death if not cured. There are many drugs on the market that effectively treat and prevent the disease but because of insufficient knowlege about their usage they might not be as helpful as they should. On average, one of four children dying Africa dies of malaria. Pregnant women are two or three times more prone to infection. It is also more likely for them die of malaria.

Malaria is transmitted by mosquitos and part of the protozoon life cycle takes place inside the insect. The protozoon before reaching its invasive form goes through many transformations inside the gnat. Their speed depends on temperature. The most immune protozoon to low temperature is Plasmodium vivax. During a gnat bite, malaria sporozoites, which are able to grow up only in a human body, get into the human organism along with the insect’s spit. They move with the circulation system to such organs like: the liver, the spleen, the pancreas and the brain capillary vessels. Inside the attacked cells, numerous divisions take place then the protozoons go to the blood cells, inside which they go through another transformations. When the infected person is bitten, the gnat will take in sporozoites along with the blood and the final development will take place in the insect’s body. The cycle will repeat when the gnat bites another person.