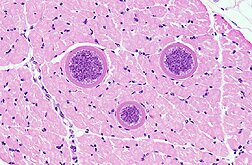 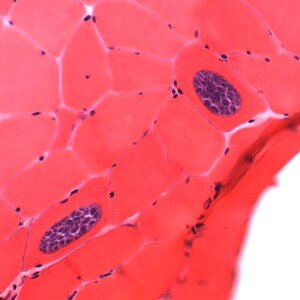 The infection frequency has not been confirmed and it is estimated at more than 10%, and it affects mostly children.

How do people get infected?

An infection starts in the oral cavity and gets there with water and food that are poisoned by sporocyst.

The acute stadium is characterized by:

The chronic stadium of sarcocyst, when flukes might be embeded in the muscle tissue of different parts of the body is chraceterized by:

There are 3 stadiums of agamogony (taking place in muscles) and other stadiums of agamogony taking place in the bowel. Sarcocystis hominis development cycles are: sporocyst, sporozoite, schizont, merozoite, micro and macrogametes, zygote, oocyst and others. When a sporocyst enters a human organism it gets transformed into a sporozoit, which then is converted into a schizont in the bowel epithelium cells. Schizonts divide several times and become merozoites, which convert into macrogametes or together with blood macrophages get into the muscle tissue (e.g. bowel), creating sarcocysts fulfiled with bradyzoites,. Microgametocytes, during the reproduction process produce micrgamets and macrogametocytes produce macrogamets. Gametes colligate creating a zygote surrounded by a capsule and as a result an oocyst is created. Subsequently, the cyst is excreted with faeces, and becomes a subject of further division creating invasive sporocyst.