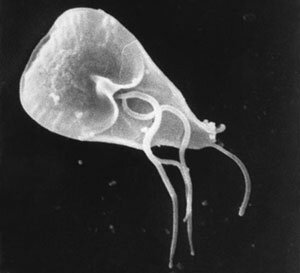 Lamblia (Giardia duodenalis) is a protozoom living mostly in the bowel (generally in the duodenum and the bile ducts).

Lamblia mostly inhabits the alimentary canal, the duodenum, the bile ducts, 1 cm of length contains 1000 lambia members. Lamblias sticks to the bowel. Its presence causes digestion problems, allergies, nutrient deficiency. Every tenth person infected with lamblia feels seek, the rest do not show any symptoms. The detection of lambia is a difficult task.

A single treatment is not sufficient, lamblia cysts can survive and another invasive forms can be created.

Lamblia existing in the bile ducts can threaten the liver or duodenum but it can also irritate the pancreas and infect it as a result.

Germs and parasites , which are inside of us, eat food that we consume and excrete as well, which is very toxic for our organism. It is very difficult to get rid of lamblia or staphylococcus so hygiene and your own body observation is essential.

Toxins excreted by this parasites cause:

Lamblia worms prefer sugar, refined products as they strengthen them the most. If somebody likes sweets then he is more prone to invasive infections caused by this protozoon.

Immunoenzymatic tests are 89 – 95% accurate. They consist in examining faeces in search for specific enzymes produced by tropozoid.

Lambliasis is a parasite disease caused by a lamblia infection of the small bowel and liver. Human infections not always show clinical symptoms. Most people are healthy hosts.

The bowel infection can cause a totally exhausting feeling. X-rays detect duodenal cup and gall bladder function disorders. Rarely, pain in the right part of the hip can occur. Lambliosis liver infection can be characterized by an inflammation of the gall bladder, the bile duct, the small bowel and colon or even cirrhosis of the liver. A gall bladder inflammation caused by lamblia is accompanied by strong pain like an acute colic in the liver or chronic pains increasing while eating. It can sometimes lead to vomiting, salivatin, diarrhoea, jaundice and high fever. A gall bladder inflammation caused by lamblia, without a secondary infection, can imitate bile stones. Sometimes a faster heart beat might suggest interference in the heart-vascular system. Symptoms such as nervous system disorders shown in tiredness, irritation, apathy, tearfulness, headache, temperature disturbances, kids’ slow growth, metabolism disorders, loss of weight, trembling fingers and increased sweating might be caused by toxins.