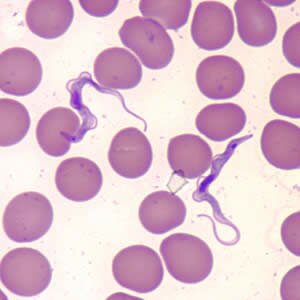 Trypanosoma gambiense. It is a group of animal cholimastix represented by bowel parasites of invertebrates, blood parasite of vertabrates and rubber-plant milk parasites. Their body is long and they reproduce by longitudinal division.They move by using its waving membrane. They are transmitted by biting insects and leeches. The shape of their bodies change when the host is changed. Some of them have pathogenic activity like: Trypanosoma gambiense transmitted by tse-tse fly and causing African sleeping sickness.