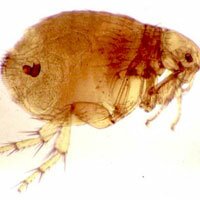 Fleas (Siphonaptera). Blood-sucking parasites occuring on mammals and birds. Almost half of the known parasitizing insects are fleas. There are almost 1500 flea species. Most of them attack wild animals and pets. They are also konwn for attacking not only men and animals but also each other. Numerous hosts and their frequent changes have an important meaning for transmitting dangerous pathogenic microorganisms from animals to men and from animals to other animals.
Fleas occur all over the world. Some species are able to spread widely and others live in a limited area.

Fleas are parasites reaching from 0,8 to 7 mm. They have no wings, which were lost because of their way of life. Their highly developed legs allow them to jump high. The mouth lets them sting and suck blood. Their body is covered by a hard skin with teeth directed backwards.The colour of the body oscillates from light to dark brown. Their bodies are flattened on the sides which makes it easier for them to move among hair and feathers.

Mature fleas attack animals and suck their blood. During the day, it is able to suck 20 times more blood than its weigh. When there are no animals around, fleas attack people. After 1 or 2 days fleas start to lay eggs. Fleas, depending on its species, are able to lay from 600 to 2000 eggs. The eggs are mostly laid on the skin (in the fur) of an animal then the eggs fall from it.

Hatching larvas stay away from the sunshine in places like: carpets or under the furniture. The larvas feed mostly on mature individuals’ faeces.
The larvas transform into mature individuals.If there are some hosts living around them (men) they cause ground vibrations by walking and the larvas hatch and attack. Fleas closed in their cocoons are able to survive several months, waiting for a host.