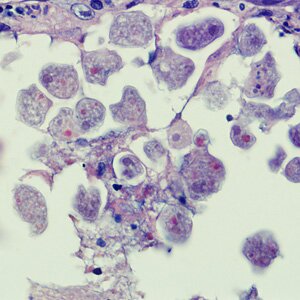 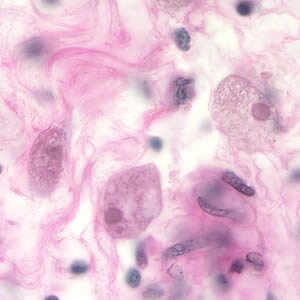 Dysyntery (Entamoeba histolytica). An amoeba of this dysyntery belongs to Sarcodina – a protazoon moving by pseudopods. It occurs in two forms: an active trophozoite located in the large bowel or attacking tissues or in a capsular form –a cyst, which is an infectious form. The size of the trophozoite is about 10 to 60 cm, average 25 cm. It contains a single nucleus with a peripheral chromatin and a central caricoma. A trophazoite cytoplasm is divided into a homogenous ectoplasm and a differential endoplasm containing numerous aquatic warblers and granules.

Possible complications
Amoebic liver abscess, which can be deadly, rarely shows symptoms of a sharp stomach. In less than 1% infection cases, a tumor comes into being in the caecum or colon. Amoebic changes in the caecum might cause a series of symptoms suggesting appendicitis. The existence of a syndrome after large bowel catarrh dysyntery is still controversial as it is assumed that the healing period can last upto several months. Permanent consequences of amoebic dysyntery are: large bowel narrowing, bowel function disorder, urinary system or skin fistulas. Amebophobia is a quite common effect. In about 10% cases of bowel amoebic dysyntery, amoebic liver abscess occurs, generally a single one (80%). It happens several times more often to men than women. The first symptoms of the disease appear a year after bowel invasion, sometimes a couple or more than a dozen years after return from tropics. Liver abscess might have an acute course, especially for young persons – fever, strong pains in epigastric zone beaming to shoulder and sometimes chest perforations. In a chronic course there is a possibility of slimming, stomachache and subfebrile states. The elderly might suffer from the chronic form of  the disease involving undetermined stomachaches, full epigastric zone sensation and disgust for alcohol. Sometimes an enlargement of the liver occurs. Clear leukocytosis, a rapid dicrease of red blood cells, considerable activity of alkali phosphotase suggest an existence of the disease. Amoebic liver abscess might cause complications like: transmition to the oral cavity, peritoneum, pleura and pericardial sac, more seldom the lung tissue. The death rate caused by this complications is estimated at about 35%. The brain amoebic dysynetery occurs rarely but taking into consideration its sudden beginning and fast develpment, it often leads to a change in a several-day period. Focal symptoms and mental disorders in bowel and extra-bowel amoebic dysyntery suggest brain amoebic dysyntery. Skin ulcer lesions caused by the disease occur in the anus, groin and fistula area.

Only people travelling to endemic countries are prone to the dysentery but those who are already infected might spread it in their homes. If it is not detected in time it might cause numerous complications and sometimes lead to death. Therefore, you should remember to go through a medical examination after returning from a tropical country and take special hygiene precautions during your stay in such countries.

The dysentery, if it  is not cured, may lead to death caused by a bleeding, bowel perforation or curculation inefficiency. An acute form usually changes into a chronic bowel form, which involves the following symptoms:

Extra-intestinal amoebic dysyntery is generally connected with the liver, where amoebic liver abscess occurs. The symptoms are:

Liver ulceration might spread on other tissues like: the lungs, pericardial sac, spleen, brain. In case of reduced immunity, it might lead to death.
An asymptomatic infection (carrier-state) is when trophozoites stay in the bowel. There is a hypothesis that the bowel mucosa of certain people is able to produce substances which deactivate protozoon enzymes. This ability is also associated to the bowel bacterial flora.

Disease detection is confirmed by a laboratory examination:

The only possibility of infection is by the digestive system when the cyst of amoeba gets into the alimentary tract. Traphozoites are not invasive as they perish in the acid of the stomach, the same as in the outside environment. Cysts exit the body through the anus and get into water, crops fertilized with excrements. they are carried by flies, or by people on ditry hands and get into the alimentary system.