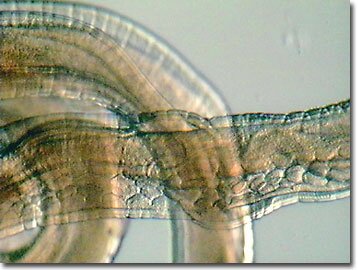 Human whipworm (Trichuris trichiura). A whipworm is 3 – 5cm long and has a frontal thread-like body. It penetrates the large bowel, especially in the caecum and around the anus. The female lay 2000 eggs a day which, similar to eelworm, develop in soil into an invasive form within a few weeks. It does not penetrate the liver or lungs but it settles in the large bowel. The parasite eggs appear in faeces in 3 months after infection. Whipworms live several years. Their infections are quite common, especially in hot and tropical countries. In Vietnam, 80% of the population is infected however these are not serious cases.

Female individuals lay about 2000 eggs. The eggs together with faeces get into water and soil where they grow up in a couple of weeks. An infection takes place when the contaminated water or food are consumed. The eggs in the host’s alimentary system (the small bowel) release larvas, which become mature within a month and then move to the large bowel.